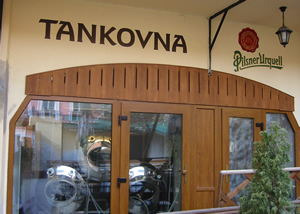 Ever wonder why the Czech Republic’s beloved Pilsner Urquell tastes better at pubs such as U Rudolfina, U Pinkasu and Kolkovna? And surely you’ve asked yourself why that draft half-liter tastes almost nothing like the bottled version you tasted in, say, Chicago. Two words suffice to explain the secret of the best brew in Prague: It’s unpasteurized. That’s right. While most of the Pilsner Urquell served around the country (and the world) is pasteurized, 180 high-volume pubs around the Czech Republic are allowed to serve the natural, unpasteurized version. Instead of being dispensed from barrels, the beer is pumped directly into replaceable sacks stuffed inside large on-site tanks.

A pub that serves this style of beer is known -somewhat secretly – as a “tankovna.” Pasteurization itself is no crime. After brewing, fermentation and lagering, beer destined for most domestic and international markets is heated to 60 degrees Celsius (140 degrees Fahrenheit) for 20-35 minutes. The result is a beer that is stable and pure at the microbiological level, giving it has a much higher tolerance for the changes of temperature and other small shocks it receives during shipping and storage. 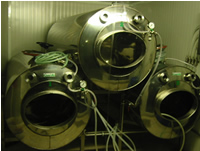 But that additional level of security comes at a price. While pasteurization does make the beer more stable, the heat also kills off much of the characteristic spicy flavors of the classic Pilsner’s Zatec hops. Additionally, pasteurization can greatly increase the beer’s chance of oxidation, which can lead to staleness or give it a taste of cardboard or other off-flavors. Those bad flavors can be especially apparent after a long sea voyage. As David Miller once described exported Pilsner Urquell in his book Continental Pilsner, “Many times it is old and stale with its hop character sadly gone.” There’s little chance of anything like that happening at a tankovna. To make sure the brew doesn’t go bad, Pilsner Urquell requires that all tankovna beer be consumed within two weeks. Consequently, it’s not only fresh but it also has a much fuller, rounder body than the pasteurized version. That small improvement is remarkable enough – but an even greater difference lies in the unpasteurized beer’s sharp, peppery hop aroma and its smooth, bittersweet finish. These flavors are noticeably brighter and more dynamic than those of the pasteurized version, especially when you compare them to the occasionally tired bottles shipped off to the United States.

Although Pilsner Urquell is the only major brewer to deliver unpasteurized brews to Prague pubs, the city’s four microbreweries all offer their own variations on unpasteurized beer. Additionally, some small-scale brewers, such as Bernard, are also unpasteurized, although this beer only comes from kegs or bottles, not tanks. For the real deal, stop by a local tankovna. According to consumer polls, most Czechs consider Pilsner Urquell to be their highest-quality domestic beer. Try it at a tankovna and decide for yourself.

This article was originally published in the Prague Post and has been displayed here with the author’s permission.